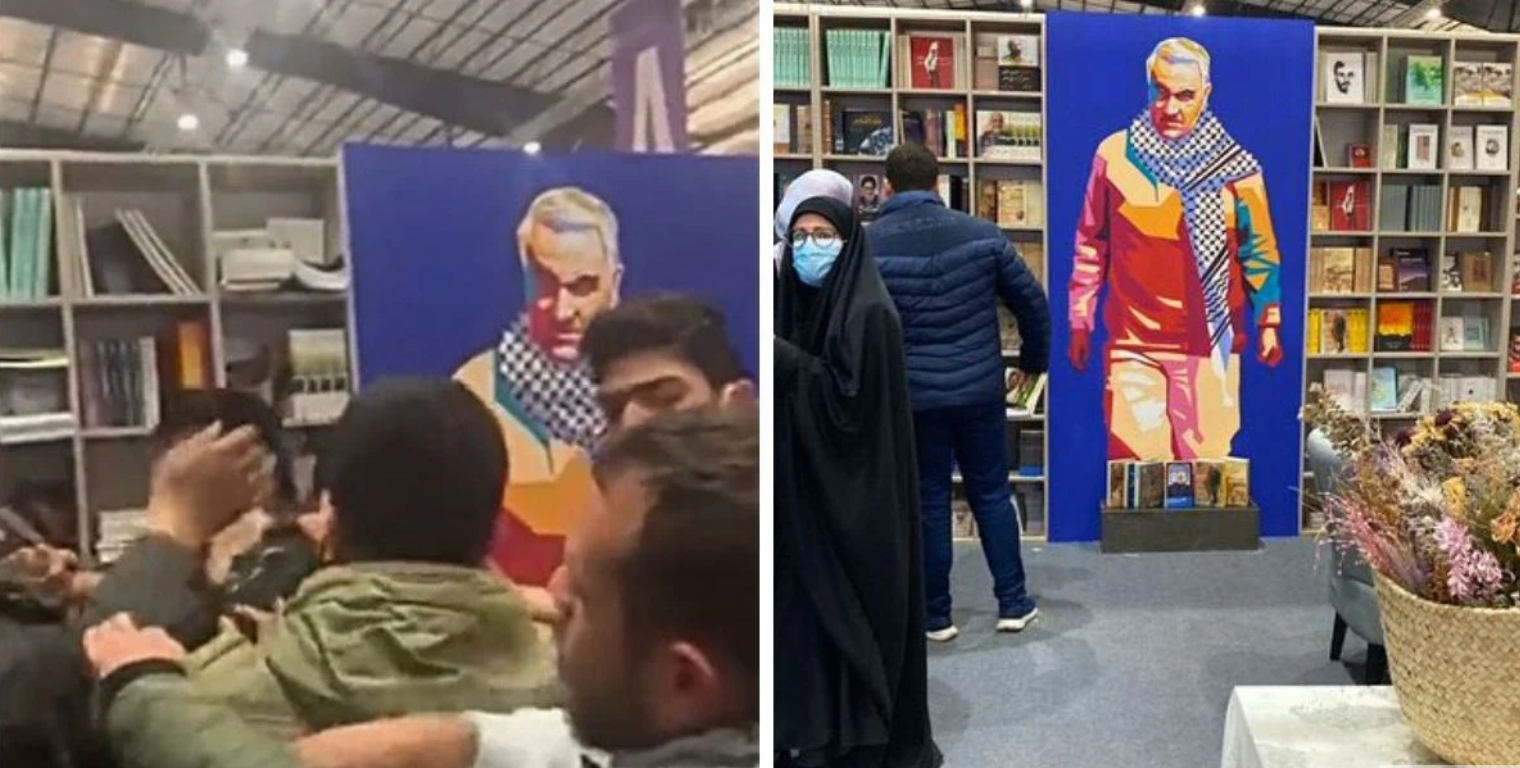 By Najia Houssari — arabnews.com — BEIRUT: A scuffle broke out on Monday at the Beirut International and Arab Book Fair taking place at the Seaside Arena after activists demanded that the displayed pictures of Iranian Quds Force commander Qassem Soleimani be taken down. The activists, among whom were Shafiq Badr and Nelly Qandil, were severely beaten up after chanting “Beirut Free, Iran Out!” Soleimani’s huge picture was displayed at one of the book fair’s pavilion that kicked off last Thursday, angered social media activists and mocked the exhibition as the “Tehran Book Fair.” A squad from the Internal Security Forces Intelligence Branch later arrived on the scene and launched investigations as a number of other activists arrived in solidarity. Badr is part of the “Lebanon Rises Up” group, while Qandil is part of the “Lebanese sovereign opposition” group.

The book fair, organized by the Arab Cultural Club, was launched in its 63rd session under the slogan “Beirut cannot be broken” after a three-year forced hiatus due to the economic crisis, the COVID-19 pandemic, and the Beirut port’s explosion. Traditionally, the exhibition takes place in January each year, which has confused some participating publishing houses. Ninety Lebanese publishing houses – from Syria and Egypt and 10 from Iran – are taking part in the exhibition.

Activists circulated pictures of books displayed in the participating pavilions, noting the large number of books with photographs of Soleimani and other Iranian figures. This scene seemed sufficient to criticize the exhibition and dig up political sensitivities of what Soleimani represented in Iranian politics and its hostilities in Iraq, Syria and Lebanon, especially since Hezbollah is keen to raise pictures of Soleimani on every occasion. Soleimani’s pictures are also placed on the road leading to Beirut airport and in the south and the Bekaa. Meanwhile, the Arab Publishers Association missed the exhibition. The exhibition’s permanent goers noted “radical changes in its pavilions and books, amid the absence of Gulf publishing houses that used to be present in each edition of the exhibition as a kind of support, due to the diplomatic and economic crisis between Lebanon and Saudi Arabia and a number of Gulf countries.

Two days ago, when the exhibition hosted a concert, protests erupted in the Iranian pavilions, according to activists and eyewitnesses. “People broke into the place and shouted in protest at the loud voice of the music,” said a girl who was attending the concert. Prime Minister Najib Mikati, during the inauguration of the exhibition last Thursday, said that “it is one of the many pillars to immunize the Lebanese and Arab people against patterns alien to our nature, culture, traditions and heritage, which we cherish.” Former justice Ashraf Rifi said in a tweet that “Soleimani’s image in the exhibition is provocation to the Lebanese people who were stung by the Iranian occupation,” and that whoever put it “wants to bully the Lebanese, but the youth of Lebanon are stronger than this arrogance.”

MP Fouad Makhzoumi said: “Even the Beirut Book Fair did not escape unscathed from Hezbollah, which is working to paint this ancient cultural destination with an Iranian identity that does not resemble it, and with the ideology of death that has nothing to do with the Arabism of Beirut, its coexistence and diversity.” The deteriorating living conditions in Lebanon reflected in a decline in the purchase of books at the fair. Some publishers said “demand for books has fallen by up to 70 percent in libraries.” “The cost of any book is at least $10, that is, more than 200,000 Lebanese pounds,” Mona Ismail, one of the permanent exhibition goers told Arab News, adding “getting into the show tempts me a lot, but at the same time it is going to hit me financially.”

This year, according to one of its curators, the Arab Cultural Club rented pavilions to publishers at reduced prices to encourage them to offer discounts to customers. However, the high prices of books are due to the high cost of publishing and printing supplies, all of which are paid in dollars at a time when publishers sell their books in Lebanese Liras.