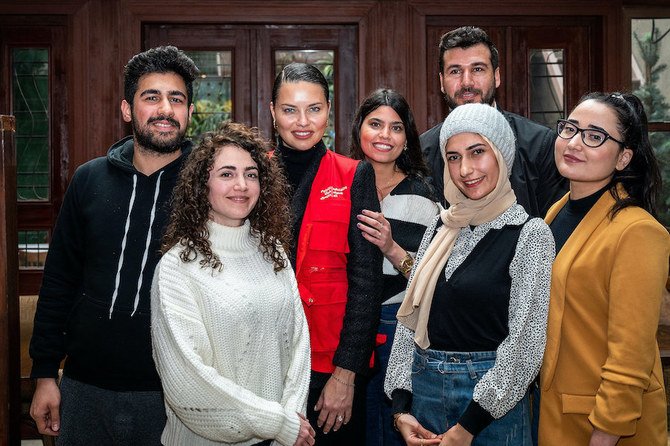 By arabnews.com — DUBAI: Just 48 hours after Adriana Lima debuted her baby bump and showed off her maternity style while sitting front row at the Balmain fashion show in Paris, the Brazilian supermodel jetted off to Lebanon for an advocacy mission in collaboration with the Education Above All Foundation, an international organization founded in 2012 by Qatar’s Sheikha Moza bint Nasser that aims to improve the lives of poor and marginalized children, youth and women. On Sunday, Lima, 40, was photographed at the site of the Beirut port explosion, which tore through the Lebanese capital city on Aug. 4, 2020, killing over 200 people, injuring thousands and leaving 300,000 without a home. The model went to Lebanon for an advocacy mission. Supplied The explosion caused widespread damage, destroying much of the capital and leaving homes, schools and shops decimated. The former Victoria’s Secret model, who is expecting her third child with partner Andre Lemmers, also visited a school damaged by the blast and rehabilitated by UNESCO with the support of the EAAF and met with children and teachers who were victims of the devastating explosion.

Lima, who is celebrating 25 years in the fashion industry, is also a humanitarian who often uses her platform to advocate for disadvantaged groups. She met with children and teachers who were victims of the devastating explosion. Supplied Among the causes she supports is the St. Luke Foundation for Haiti, which provides expectant mothers with medical care and facilitates education in disadvantaged communities. She also gives back to orphaned children in her native Salvador, Brazil, through Caminhos da Luz (or Paths of Light). In 2009, she appeared on “Var mısın? Yok musun?,” the Turkish version of reality television series “Deal or No Deal,” and her prize money was donated to a hospital in Istanbul for children fighting leukemia. The expectant mother of two is among a long list of celebrities who have shown support for the Levant nation following the Aug. 4 blast.

Part-Palestinian model Bella Hadid, American actor George Clooney and his wife, Lebanese-British human rights lawyer Amal Clooney, Canadian singer The Weeknd and more are among the A-listers who donated to various Lebanese charities in the wake of the tragic event. Oscar-winning star Meryl Streep also showed her solidarity with the victims of the tragic blast by donating $25,000 to Kafa, a non-governmental Lebanese organization that aims to eliminate gender-based violence and exploitation in the country.