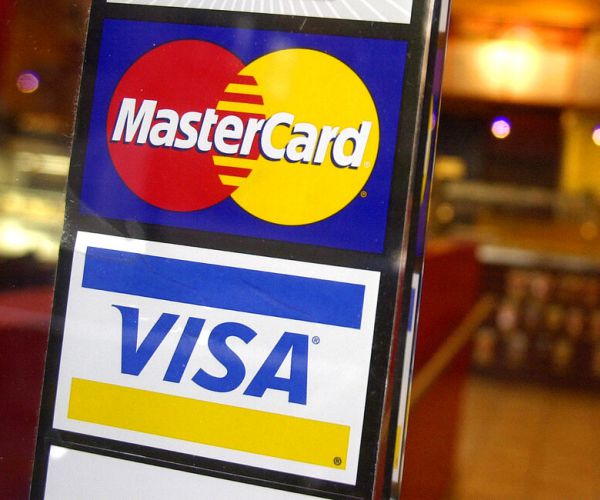 By Sandy Fitzgerald — newsmax.com — Visa and Mastercard announced Saturday they will stop all credit card transactions connected with Russian clients and financial institutions in the upcoming days over the deadly invasion of Ukraine following a plea made by Ukrainian President Volodymyr Zelenskyy to members of the Senate earlier in the day. “We are compelled to act following Russia’s unprovoked invasion of Ukraine, and the unacceptable events that we have witnessed,” Al Kelly, chairman and chief executive officer of Visa Inc., said in a press release posted on Business Wire. “We regret the impact this will have on our valued colleagues, and on the clients, partners, merchants, and cardholders we serve in Russia. This war and the ongoing threat to peace and stability demand we respond in line with our values.”

The credit card giant said this means that effective immediately, Visa will be working with clients and partners inside of Russia to stop all Visa transactions, including through merchants and ATMs. Once complete, all transactions that are initiated with Visa cards that were issued in Russia will no longer work outside the country, and cards that were issued by financial institutions outside of Russia will not work within the Russian Federation, the company said. Mastercard, in a separate statement Saturday, said they are also ceasing all operations in Russia over the invasion. “For more than a week, the world has watched the shocking and devastating events resulting from the Russian invasion of Ukraine,” the company said. “Our colleagues, our customers, and our partners have been affected in ways that most of us could not imagine.  Just after the invasion, Mastercard blocked multiple financial institutions from its payment network, while saying it was continuing to work with regulators to abide by compliance obligations.

But on Saturday, the credit giant said it’s been in dialogue with customers, governments, and its own employees and shareholders, but “noting the unprecedented nature of the current conflict and the uncertain economic environment” it decided to suspend all network services. “This decision flows from our recent action to block multiple financial institutions from the Mastercard payment network, as required by regulators globally,” the company said. During his call with the members of the Senate, Zelenskyy said that U.S. and European sanctions should target ordinary Russians specifically, even while the actions have crippled much of Russia’s economy, reports Politico, quoting three people who participated in the call. The Ukrainian president told the senators that Russia’s people should feel the pain of the sanctions, considering how much his country’s people are suffering, and specifically mentioned cutting them off from Visa and Mastercard. As with Visa, Mastercard is no longer supporting any of its cards that were issued by Russian banks or allowing any Mastercard issued outside of the country to work through Russian merchants or ATMs.  “We don’t take this decision lightly,” the company said. “Mastercard has operated in Russia for more than 25 years. We have nearly 200 colleagues there who make this company so critical to many stakeholders. As we take these steps, we will continue to focus on their safety and well-being, including continuing to provide pay and benefits.”

The company said it will work to restore operations “if it is permissible under the law” in the future. The company also promised that its cyber and intelligence teams will continue to work with governments and partners to keep its systems stable. Visa and Mastercard have similar amounts of annual net revenue from Russia and Ukraine, where Visa draws $1.2 billion and Mastercard draws about $1.1 billion, reports The Wall Street Journal. Visa said in a Securities and Exchange Commission filing on Wednesday that Russia accounted for 4% of its total net revenue of $24.1 billion in the last fiscal year, with Ukraine accounting for 1%.

Mastercard, meanwhile, said about 4% of its $18.9 billion in net revenue last year came from Russia, with 2% from Ukraine. Thousands of debit and credit cards are issued through Russian banks with the two company’s logos. Ordinarily, U.S. networks handle the transactions, but when sanctioned banks are the card issuers, the companies don’t handle the transfers, The Journal reported this past week. This means that cardholders could still use their cards for purchases inside Russia but that transactions went through the Russian Mir system. Russia created Mir in 2014 after it feared that sanctions against Russian financial institutions and businesses over the annexation of Crimea would block transactions being made by Visa and Mastercard. According to the Nilson Report trade publication, Mastercard and Visa cards were used in almost 74% of card payment transactions in Russia in 2020, reports The Journal, with Mir holding the rest of the market.

In addition to developing Mir, its domestic payments network, Russia in 2014 also started to shift overseas holdings away from the United States and Europe and move them more to China and doubled its gold reserves, reports The Journal. However, at least 40% of the $630 billion Russia has in foreign reserves is in countries that are taking part in the sanctions over Ukraine, and what is in China is free only to spend in China, as moving the reserves out requires converting them into dollars or euros, with global banks are not doing, notes the publication.