Published April 29, 2005 by admin
The Khazens and the Shihabs (1697-1840)
In September 1696 Emir Ahmad Maan died with no heir ending the Maans rule of Mount Lebanon. The Shihab Emirs succeeded the Maans and in 1697 Emir Bashir Shihab I, nephew of Emir Ahmad Maan, came to power. After his death in 1706 he was succeeded by Emir Haydar who was deposed by the Yemenite originated families in Mount Lebanon after their rebellion against his rule appointing Emir Youssef Alam el Din as new ruler. As a result he fled to Azraeel cave in Hermel , hiding from the rebellions and sent his family members to the Khazen Cheikhs who hided them in their villages in Keserwan taking care of their needs , protecting them and sending him arms and ammunition and in addition, giving him important information and advices .
In 1754 Emir Melhem Shihab resigned due to his illness. Supported by the mountain Cheikhs, Emir Milhems two brothers Emir Mansour and Emir Ahmad succeeded him to govern dually Mount Lebanon. Later emir Ahmad was obliged to give up his rule after the loss of the Cheikhs support and Emir Mansour became the sole ruler of the mountain.
END_OF_DOCUMENT_TOKEN_TO_BE_REPLACED
Leave a Comment

By Lin Noueihed BEIRUT (Reuters) – A U.N. team arrived in Lebanon on Thursday to verify whether Syria had withdrawn all its troops and intelligence agents in line with a Security Council resolution. In further signs of Syria’s waning influence in Lebanon, the new government replaced the pro-Syrian police, justice and intelligence chiefs, who were forced out under pressure from Damascus’s opponents, and removed the head of state security. Syria told the United Nations on Tuesday it had ended its 29-year military and intelligence presence in its tiny neighbor and was in full compliance with resolution 1559. But U.N. Secretary-General Kofi Annan said he could not confirm that until the U.N. verification mission had checked it.

Palestinians in Lebanon Say They Will Not Comply With a U.N. Demand to Disarm

By Nadim Ladki  BEIRUT (Reuters) – Lebanon’s pro-Syrian parliament speaker promised on Wednesday that elections, the first without a Syrian military presence for 33 years, would start on May 29.  Nabih Berri’s announcement, a day after Syria pulled its last soldiers and spies out of Lebanon after 29 years, means the parliamentary elections will be held on time as demanded by the international community and Lebanon’s anti-Syrian opposition. “I can confirm to the Lebanese that the elections will happen beginning on May 29,” Berri told reporters. He was speaking even before Prime Minister Najib Mikati’s new government had won a vote of confidence in parliament, a hurdle expected to be surmounted later in the day. Mikati is a wealthy businessman with close ties to Damascus.

By Lin Noueihed  RIYYAK, Lebanon (Reuters) – Syria withdrew its last soldiers and intelligence agents from Lebanon Tuesday, ending a 29-year military presence in its small neighbor. s the Syrian troops crossed the frontier in green buses, many Lebanese hailed their departure as the start of a new era, but analysts said Damascus would remain influential. “With the completion of the Syrian forces’ withdrawal from Lebanon, a new political era in the relations between the two brethren countries starts based on close cooperation in all fields,” Lebanon’s new Prime Minister Najib Mikati said. Syria told the United Nations it had completed its pullout from Lebanon in line with Security Council resolution 1559.

By Lin Noueihed  BEIRUT (Reuters) – Lebanon’s most powerful pro-Syrian security chief resigned on Monday, hours before the last Syrian forces were due to leave their tiny neighbor and end Damascus’ 29-year domination.  The resignation of Jamil al-Sayyed, head of the General Security, signaled the collapse of the Syrian-installed security apparatus that had effectively run Lebanon for years. “Security chiefs are usually appointed with politics and change when it changes,” Sayyed said in his resignation letter. Sayyed said last week he was ready to step aside during a U.N.-ordered international investigation into the Feb. 14 killing of former Prime Minister Rafik al-Hariri, which sparked angry protests against the Syrians many blamed.

BEIRUT (Reuters) – Syria’s military will complete its withdrawal from eastern Lebanon in the next 48 hours and its security chiefs will go a day later, a senior security source said on Saturday, completing their pullout earlier than planned. The source said Rustum Ghazaleh, the Syrian intelligence chief in Lebanon, would be the last to leave after a farewell ceremony in the Bekaa Valley on Tuesday. The special military road that links the two countries will be closed behind him and the Lebanese Army will take over the Syrian intelligence headquarters in the town of Anjar. 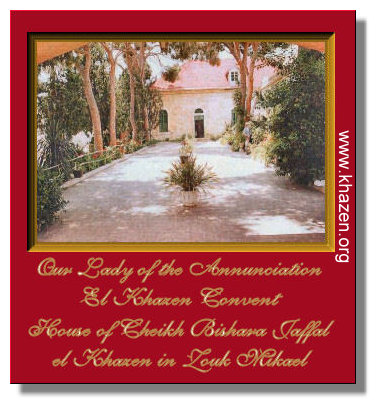 Born in 1756, Governor of Keserwan region 1808-1822. At the beginning of his term , he had excellent relations with Emir Bashir Shihab II (Prince of Mount Lebanon) who used to visit him more than once a year at his residence in Zouk Mikael , escorted by his entourage exceeding 500 persons with a similar number of horses , staying as guests of the Cheikh , for 3 days (According to Arab customs) and enjoying his warm, splendid hospitality .
END_OF_DOCUMENT_TOKEN_TO_BE_REPLACED
Leave a Comment

BEIRUT, Lebanon (CNN) — Under pressure from the United Nations and opposition politicians, Lebanon’s security chief said he was putting his fate in the hands of Prime Minister Najib Mikati.Friday’s move was a step short of resignation and comes ahead of a U.N. authorized investigation into the assassination of former Prime Minister Rafik Hariri.Jamil Sayyed, head of general security in Lebanon, said he was putting himself at the disposal of the prime minister, leaving it up to Mikati to decide his fate. The Associated Press reported that Ali Hajj, the country’s top police commander, also has stepped aside and placed himself at Mikati’s disposal. Hajj told AP he was taking the step “to facilitate the work of the international investigation commission until the end of its mission.” He said it was up to the Cabinet to decide whether to reinstate him later.

US upset by Annan’s delay in releasing Lebanon report

WASHINGTON (AFP) – The United States said it was disappointed by UN Secretary General Kofi Annan‘s delay in releasing a much-awaited report on Syria’s pledge to withdraw troops from Lebanon.  “There was a decision to postpone the report by a week. We are disappointed by this delay. We don’t see the need for delaying it,” deputy State Department spokesman Adam Ereli told reporters. “We certainly look forward to an update from the secretary general on 1559 implementation,” he said, referring to Resolution 1559, pushed by France and the United States and adopted by the Security Council last year calling on Syria to pull its forces out of its smaller neighbour. US Secretary of State Condoleezza Rice told Annan by telephone this week that “a timely publication of the report was desirable, was important,” Ereli said.

BEIRUT (AFP) – Lebanon’s well-integrated Armenian community is gearing up for the 90th anniversary of the massacre of their ancestors in Ottoman Turkey amid concerns over emigration which has halved their number in 15 years.  The Christian Armenians have been hit by the same economic hardships as other communities in the tiny Arab country which welcomed their forefathers with open arms. From 250,000 at the end of Lebanon’s 1975-1990 civil war, during which tens of thousands emigrated, the Armenian community has dwindled further to about 120,000, according to political and religious leaders of the community. “We suffered emigration like all other communities in post-war Lebanon. We are trying to face that problem, and so are our churches, with financial and housing aid,” said MP Jean Ogassabian, one of six ethnic Armenian deputies in the 128-member parliament.

By NICOLE WINFIELD, Associated Press Writer VATICAN CITY – Pope Benedict XVI on Wednesday pledged to work to unify all Christians, reach out to other religions and continue implementing reforms from the Second Vatican Council as he outlined his goals and made clear his pontificate would closely follow the trajectory of his predecessor, Pope John Paul II.  Benedict, the former Cardinal Joseph Ratzinger, listed top priorities of his papacy in a message read in Latin to cardinals gathered in the Sistine Chapel for the first Mass celebrated by the 265th leader of the Roman Catholic Church. He said his “primary task” would be to work to reunify all Christians and that sentiment alone was not enough. “Concrete acts that enter souls and move consciences are needed,” he said. The new pope said he wanted to continue “an open and sincere dialogue” with other religions and would do everything in his power to improve the ecumenical cause.

orthodoxy, was elected the new pope Tuesday evening in the first conclave of the new millennium. He chose the name Pope Benedict XVI. Ratzinger, the first German pope since the 11th century, emerged onto the balcony of St. Peter’s Basilica, where he waved to a wildly cheering crowd of tens of thousands and gave his first blessing as pope. Other cardinals clad in their crimson robes came out on other balconies to watch him. “Dear brothers and sisters, after the great Pope John Paul II, the cardinals have elected me