The Khazens and the Maronite Church

Throughout the next few days, we will be publishing a series of posts on the Khazens and the Maronite Church.  Ever since they moved…

The Khazens in Keserwan (Part1)

The Saga of the Khazens: Origins of the Family

Origins of the Family The Origins of the Khazen family are still vague. They might have emerged as nomads from the Ghassanides tribe that start…

The Maan and the Khazen (Part3)

Cheikh Abou-Nawfal el Khazen After the death of Abou-Nader in 1647, the position of Moudabber was taken by his son Abou-Nawfal who was also…

The Maan and the Khazen (Part2)

The Maan and the Khazen (Part1)

Abou Nader el Khazen   The Maan and the Khazen (Part1)   Fakhreddine The Great When the situation in Chouf went back to normal,…

Origins of the “Prince of Maronite” Title

During the 18th and 19th century, under the guidance of the head of the family Cheikh Abou Naufal el Khazen and later on his sons… 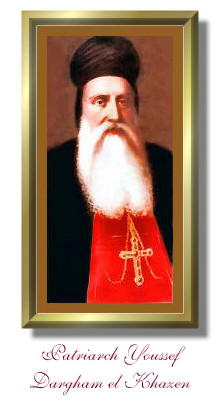 Patriarch Youssef Dargham El Khazen is also known as Ibin Fayyad (Son of Fayyad) or Abi Kanssouh Ibin Abi Nawfal (Son of Abi Nawfal) Nader El Khazen. Patriarch Dargham was mostly known for being a strong and brave man, who handled his sword and riffle with deadly efficiency. His heroic stories span all across Lebanon, and the most notable incident happened back in 1704, when he was sent to reclaim the Maronite Patriarch’s honor.

Here is a short summary of what happened on that year based on testimonies from historical books and references.

In 1704, a group of Muslim Shiite Sheikhs (Known as Hamadiyyin) headed towards Deir Annoubin in Bcharreh to meet with Maronite Patriarch Estefan Doueihy and ask him for a large amount of money. The Patriarch did not comply with their demands as he did not have the money and as a result was assaulted physically by Sheikh Issa, leader of the Shiite Sheikhs, and then cursed and humiliated publically.

After the assailants had left, Patriarch Doueihi dispatched a letter to Cheikh Hosn El Khazen informing him of the incident. Upon reading the letter, Sheikh Hosn became furious and quickly ordered his brother Sheikh Dargham and two of his relatives Sheikh Moussa Tarabay and Cheikh Nader Abou Khater to gather an army of 400 men and capture those who dared disrespect the Maronite Patriarch.

Cheikh Hosn was the son of Fayyad aka Abi Kanssou, grandchild of Abi Nawfal, and whose father occupied many important positions during the rule of Prince Maan.

Cheikh Malek Fady el Khazen (born in 1981) founder of khazen.org descendant of Chidiac Sarkis el Khazen (born in 1570) who is the common ancestor of most of the current members of the el khazen family has participated in the Genographic project by taking a sample of his DNA and sent it for test results to the labs of the scientist Spencer Wells lab. The result of this test is very important since it traces the paternal history (through 50 thousands years ago) of the majority of the members of the Khazen family. The results will be the exact same for every member of the Khazen family descendant of Chidiac Sarkis el Khazen (born in 1570) which is most of the khazen family.

Cheikh Malek Fady el Khazen has tested his Y chromosome, which is passed down from father to son and reveals the Khazen direct paternal ancestry up to 50 0000 years ago, therefore the Y chromosome will give the exact same result to all the Khazen Family members. In fact, the Y does not have a matching chromosome most of it (the non-recombining region) escapes the shuffling process known as recombination (between male and female) that occurs every generation in the rest of our genome.  This allows the Y to be passed down through a purely male line changed only by random mutation line. In this test Cheikh Malek Fady el Khazen analyzed the Y chromosome which is a purely male line therefore a purely khazen descent.The results reveal our deep ancestry along our single paternal line of direct descent (and show the migration paths they followed thousands of years ago. The results will also place us on a particular branch of the human family tree. These results have confirmed our expectations of our history. This scientific study is first divided in a history and information of the geographic project and the second part describes in detail the DNA results of the el Khazen family and analysis. 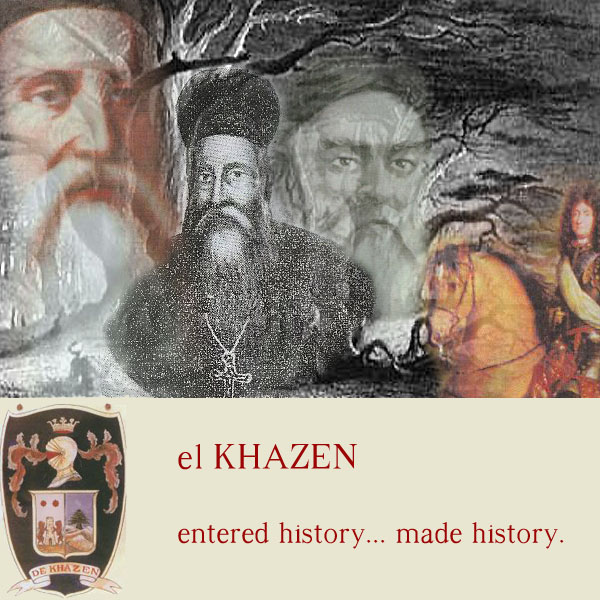